White Nationalists marched on Charlottesville Virginia.  For those who are even now preparing to defend White Nationalists as not being Nazis, and calling on all those who call them fascists as alarmists, I offer you the following photos of the marchers.

Armed and proud to quote Adolf Hitler, the White Nationalist Nazis, raised on our own North American soil, the same soil that raised the Great Generation who suffered so much to end the blood soaked dream of Adolf Hitler’s Nazi dream of a Thousand Year Reich built on the blood of innocents.

A new mythology has sprung up, rooting the Nazi racist dogma in a romanticized vision of the Southern past, a dream of an idyllic civilization of white, slave owning, America.  Rather than looking at slavery as a great crime and abomination, they glorify the mythological old south, without being bothered by petty concerns like the actual history involved.  We are told time and again not to equate the Confederate Battle Flag (usually mistakenly referred to as the Confederate flag, because they literally know that little about the past they are lying to themselves about) with the Nazi flag.  This is hard to do, when they keep marching them side by side at their hate filled rallies. 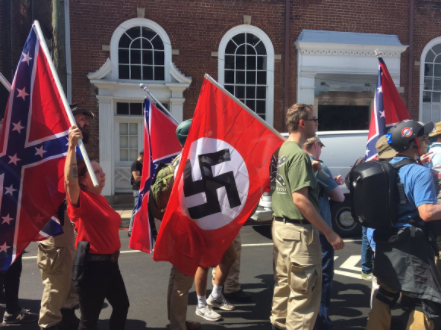 In this picture, you see American patriots, who risked their lives to defend freedom, and drive the Nazis into extinction.  Our grandfathers gave almost an entire generation of their blood to end this nightmare, we had hoped forever.  Then we failed them.  We failed to keep the watch, to honour the sacrifice of the hundreds of thousands who gave their lives to put this nightmare in the ground.  Our generation allowed it to return.

The Nazi’s began with fomenting hatred, escalated to street violence and murder, and ended by subverting the mechanisms of their democracy to remove all legal checks to their abuses of power, and permit the birth of their nightmare racial vision in blood and fire.

We see now the willful fomenting of hatred, but the right wing turns a blind eye to it.  We see the escalation of street violence, but too often the police who will shoot dead a person of colour for suspicion of holding a weapon, will allow these right wing militia stormtroopers to march armed as for war. 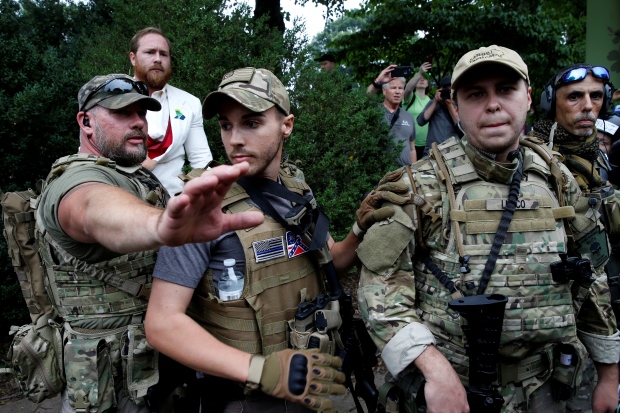 How does tolerance for Nazi thuggery end?  What is the reward for turning a blind eye to evil?

The murder of our citizens.  This time, the Nazis are killing not on streets far away, where we are free to decide whether or not to join the war to oppose them.  This time the Nazi are on our streets.

This Nazi supporter drove his car into a crowd of counter protesters, killing a 32 year old woman, and injuring many others.  Murder in support of the doctrine of inciting racial war.  Murder by the scum who want to begin a war on our streets.

When London saw a Islamist extremist drive his car into a crowd of tourists, our nations were quick to call it terrorism, and demand action against those far distant demagogues crying for Islamic extremists to commit murder on our streets.  When we saw Canadian servicemen killed by Islamic extremists using a car to kill uniformed military personnel, we saw an immediate call to arms against those who call for murder in the name of their hate filled causes, and opposition to our free and open society.

Now it is here.  Those who call for and commit to the murder of our folk, in support of overthrowing our free and open society are here.  They are white, and they are openly armed while calling for their civil war.

What will we do? Admit that we only oppose terrorism when the wrong colour people are doing it?  Or are we the same blood and bone that gave rise to that greatest generation, are we still the people who valued freedom enough to stand against the Nazi darkness, and cast its shadow from Europe, no matter the cost in blood and coin that it cost?

The time has come to treat the Nazi like we do Isis, the Taliban, Hamas.  White Nationalists or Islamic Nationalists, those who are willing to kill our own citizens to tear our hard won freedoms from us will either find us of all races, religions, and political affiliations standing as one, the true inheritors of the great generation, willing to prove that those who died for our freedom in the Second World War did not die for nothing.

The alternative is to do what we have been doing until now.  Ignoring the enemy among us, as long as he is white.

For the record, I am white.  I am a proud citizen of a free democratic nation that understands that all our citizens, of whatever race, religion and gender are free and equal under the law.  I will fight to defend that, as I served in our military to do.  I hope that the nations we all joined to serve still value their freedoms enough to defend it from home grown terrorists.

Odin tells us in the Havamal:

127. I rede thee, Loddfafnir! | and hear thou my rede,–
Profit thou hast if thou hearest,
Great thy gain if thou learnest:
If evil thou knowest, | as evil proclaim it,
And make no friendship with foes.

Well, I see the evil.  The Nazis are just that.  Evil in their very essence, and foes of my blood, and of my nation.  I will make no bargain or peace with them, and woe betide the nation that clutches such serpents to its breast.

2 thoughts on “Nazis free to kill on our streets”