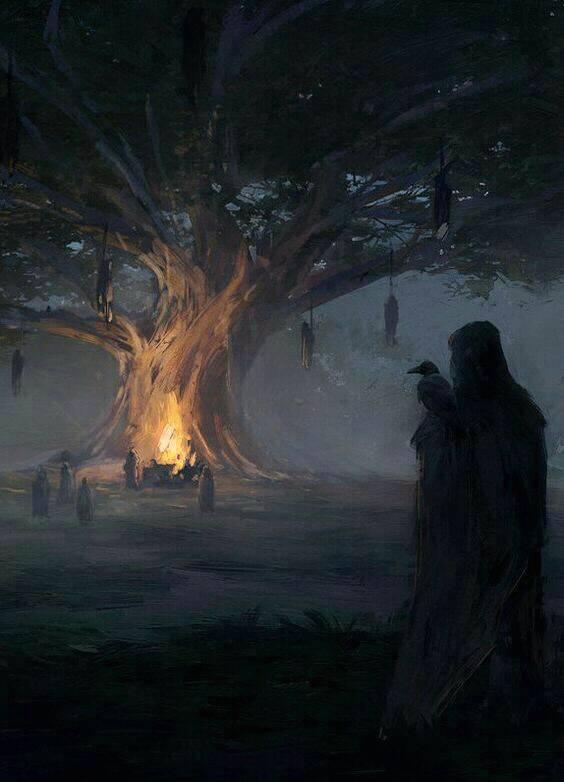 [Not saying this is how it came to pass, just a dream I had in the hours before midnight and dawn, right as I was waking]

I do not know who they thought they were summoning, but they made a mistake and released me from the chains that bound me since the worlds were forged.  Dark and hungry I rose, rose to the summoning meant for another.  I did not know who they thought to call, but they called to me, and I cannot be bound by any mortal naming, not fully, as I was born before this world was formed, and my whole name is not in it.

I break across the worlds, but with only part of my name used, not all of my power comes with me, and I am but a shadow of my full glory as I fill the darkness of the moon lit grove with something deeper and colder than winter’s night.

Chanting rises at my coming, and cheering both.  I stretch out my dread arms to test the limits my would be masters have imposed and find…..nothing.  They have called me but not bound me.  I bare my fangs in fury, do they think me so weak they need no protections from me at all?

As I bare my teeth and snarl, so do the warriors raise their weapons and beat them on shields, so do the maidens and matrons howl back in answer and a wave of their pride, their fury, their madness answers my own.  Meat is brought to me still on the bone and I tear at it, two strong men bear a roast boar to me and I take it in my hands and tear at it with jaws greater than a bears, they shout in answer.

As I see a shadow creep to my side, I suspect at last the trap will spring, and their bindings they will lay upon me.  Instead a child of less than a dozen summers lays a crown upon my head, woven of holly and ivy on supple evergreen, bound with human hair.  Power is in it, power of a whole community, power offered freely.

I turn from my feeding but do not strike, cannot strike, for I have been gifted without deception, been honoured without insult, I will not be the first to break faith, as in my name no place was oath-breaker, no matter how many syllables of terror and blood it may sound, in no part of my name is liar.

As I stare, the mother of this child stands before me and pours into my mouth a potent brew of honey.  Sunlight has blessed the honey, the fruit of every flower of the field, every tree and grass, yet in the magic these humans have wrought is decay and death, transformation and destruction.  Potent alcohol courses through it, for this is sunlight as shadow, birth and death, death and transformation.  Mead they call it, the light rendered as darkness, fire flowing as water, death from life, joy from suffering.  I drink deep.

They come for my blessing and I put my mark on them, deep inside in the blood and darkness I burn myself into them.  One day they will betray me and I will destroy them.

I dream again, for now I do not lie bound in torment but rest between the worlds feeling the new thing working within me, new bonds growing, connections forming.  I dream, who never dreamed all the ages of the world.  A thousand lives I dream, the lives of all those I marked, the fair the foul the foolish, I dream them all.

The call comes again, faint for so few have the power to call at all, and the way between the worlds is made fast against my kind.  No one may compel me now, for I am whole and strong as not for ages long forgotten, no power can compel me, but  I am curious.  I will go.

I come at last to another clearing, I step my foot upon the ground and know this to be hundreds of leagues from where I was first called.  Around me hang offerings from the tree, animals and men both, the men and women are grim the children weeping, they call to me and I answer.

The men come with weapons, armed for war, spear and axe, bow and hammer, crude swords and farm tools set on long hafts to reap men not grain.  They call to me, they seek my aid, I sneer, what do they think me?  I do not give but take, I do not heal but kill, I do not create but destroy.  I am the ending of things, and will promise no protection.

They lay their weapons before me and their hearts as well, their prayers I hear, and rock back in shock.

None pray to live, none pray to be spared the blades and fury of the foe.  None pray for glory or fame.  They ask that I take their fear, they ask that I witness their stand, take the blood they shed as offering, ask that if they fall I remember their end.  They offer me their deaths, bind themselves to me in the doing, and bind me to them by doing so.

I put into them my rage, my fury, what I take is their fear.  I will drink their pain as I drank their mead, I will take their falling blood and the blood they shed as my offerings and I will glory as they fall, but I will remember.  In ages beyond number, long after these worlds are collapsed into the crushing darkness of the void, I will remember.

I lose myself in the glory of it, those who drank deepest of me threw aside their shields and gave themselves unto the spears of the foe to draw closer to them.  Men in bright armour my people did not own, with great metal bossed shields and bright steel weapons broke as my chosen gave their lives to break a line.  I was with them, those who embraced their fear and sought only their death found me with them every stride.

They called me Victory, they who won the day in blood and fury gave praise to me for what they spent their own blood to earn.  They left the weapons they could not match upon the field as spoils to me, hung the enemies they took from the tree that they may be shared with me.  As they bound the dead to the tree, so they bound me.

The women offered to me for wisdom, to guide their children that they know better fortune than they did today, but what vision have I for such.  I was no oath breaker, and I was bound by their gifts to gift the same.  Old I was when the world was forged, and if I was not that which they needed, I was a thief, for which I was bound, having stolen that which my kind was never to know, so let me steal again what I needed.

Bound myself to the tree for I would trade the eternity that was mine for the knowledge of this world and what will and could be.  The tree is this world, extending all times and all places within it, but the tree was of the founding and will be of its end, and to bind yourself to the tree is to bind yourself to endings; me who was before the beginning to bind myself to an ending so I could see what could be.  I saw, and could not stop seeing.  I screamed and raged, for the end of all things I saw, and me with it.

I felt the call, I was called by the blood of the child who crowned me.  I came from the storm, spare and wild, half mad and half tamed, for she who had the right to call asked the price of her gift.  She asked for a life.

I stood before her as she begged for her child, but I was a killer not a healer.  I was the bane and not the boon, I was the ender of things, the destroyer of all, what could I do.  For all that I knew, for all I had paid, I had seen only endings, not hope.  Yet, she asked.

The child burned, and death was in her.  The mother begged, and asked me to save her.  I told her truth, I am killer child, not saviour.  She slapped me then, as no living man would dare, and told me to kill what is in her.

I kissed her then, full and hard, for she saw what I did not.  I was the killer of all, and so killing I did.  I reached into her child and what was hers I left, and what was not I killed.  The child called out in fear and pain, but I raged in her blood like icewater breaking the dam, sweeping the killing heat before me like a shattered dam before the flood.  My power scoured her, taking poisons and tearing them down, taking pus and ripping it from its pockets to be carried by the flood as I drove it free of her.

Turning to the mother that dared to lay her hand on me, I saw what grew within her, of her but not of her, a tumour that would grow and consume her, and laughing, my eye burning bright, I thrust my hand deep inside her and tore out that which grew.

They call and I answer, they call and I come, they keep faith with me and so I am bound by my nature to keep faith with them.  I am or was a thing more terrible than they fear in the darkness, but I am not that alone any more.  Given to me their hopes and dreams, their fear and pain, their victories and their trials and I have eaten them all.  Each one binding me to them, and them to me.

Names they give me, names that change me, as what I give them changes them.  Bound we are, each to the other. I am the thing they called, I am the thing they made, they are the people I marked, they are bound to me and I to them.  I was eternal and limited, but for them I bound myself to time and fate, and became so much more than should have been possible.

I was a thief first and will steal them from the death I bound myself to accept.  If I am not what I was, what I am you should fear.